First, let me introduce myself saying I'm a newbie here, though I've lurked on and off for some time. (I suddenly feel the need to wave. Anyway.) I live in Argentina, so my post brings you an abandoned place from far away for many of you.

rural_ruin a few days ago about the Tatham Hotel in Kentucky inspired me to finally get together my photos and make a post here about this old hardware store that was abandoned mid 1960s. I live in a small town, so it's a quiet street by night and the fact that it’s by the train tracks means many homeless people have been using it as lodgings during the night and leave during the day for years now, which is the reason why it was messy and abandoned for so long.
The Ferrari & sons Hardware Store, as it was originally called, opened mid 1930s and closed down around forty years later. It was original owned by my great-grandfather, my grandfather and his three brothers and one sister. All but one has died now, so the building is shared by sons and nephews, which makes the handling it a big affair. It’s up on the market for sale now and while I’ll always have hopes for it to be restored and turned into something else, the floors and walls are much too damaged to do anything else with it but demolish it. It makes me incredibly sad, so I went in a bit of an expedition to photograph it thoroughly. I went with my dad, my dogs and a friend of the family, so if you see a head or furry legs in two or three photos, it’ll be the overactive creatures that can’t stand still long enough.

(The photographs sum up to around 70, so I'm posting it in two parts. Second Part coming right after this one)

Here is the second (and last) part to the Abandoned Hardware Store post from Argentina. Again, not dial-up friendly. 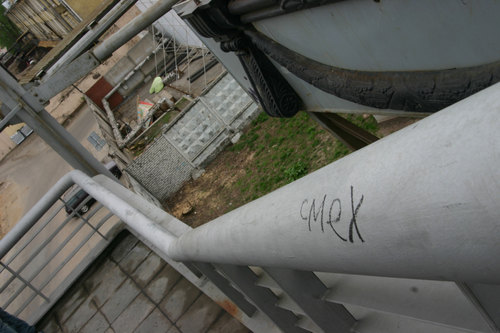