more in the journal!

a quick intro. i am

misskat and i am from that small country near the bottom of the world called new zealand.
i am very much into finding abandoned places which is hard in new zealand, as it is too expensive to keep places empty for too long, and they general get ripped down pretty quickly as it's too expensive to get them up to the earthquake safety standards. but on the other hand, there are plenty examples of urban decay and i look forward to sharing some with y'all.

right so onto my adventure. this was my 1st urban exploration and this first series of photos were taken at an old malt mill, and has an amusing story.

when we arrived, there was a gate open, but it had a sign near it that said "caution police exercises". we thought f**k. we walked through the gate and saw some people off in the distance, but the cool looking buildings were right beside us. there were a few cars that drove in the gate. we waited around for a bit, then made a dash for some stairs we could see.
so we had our adventure, took lots of photos and didn't go anywhere near where there were cops milling about.
as we were leaving one of the cops came walking towards us. "excuse me" we kept on walking thinking "oh f**k oh f**k", then he said "EXCUSE ME" a lot louder this time, so we stopped.
"you aren't taking photos of us are you?"
i felt like telling him he wasn't pretty enough. and my friend was resisting the urge to take his photo lol.
"no no, we are taking photos of the buildings, thats all"
"well, we are using explosives. is there anyone else about?"
"no, just us and we are finished"
he said thank you and sent us on our merry little way.
i told my partner when i got home that they were wearing a black cop uniform, so apparantly they were armed offenders squad. and they may have well been in their rights to take our cameras.
and as there where no trespassing and keep out signs everywhere, they could've made a big deal about us being there.
but it was cool they didn't and we are hard core for going in there when we KNEW there were cops there hehehe
enough babbling....

the very first place i visited.
we had to be very careful here, most of the old asylum has been pulled down to make way for the new hospital, so there is still a functioning hospital all around the area we were exploring. all that is left of the old asylum is this building, a fountain that still had running water, a bridge over what used to be a pond and a bird house.

EDIT: sunnyside back in the day
the womens room
man ploughs outside the asylum 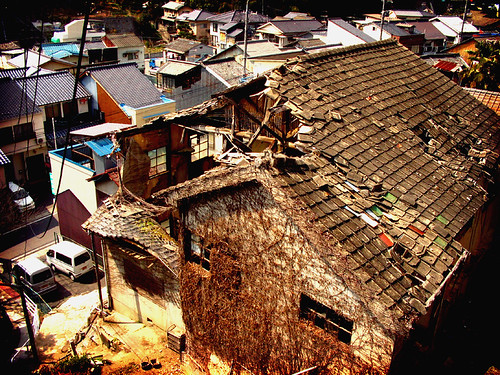