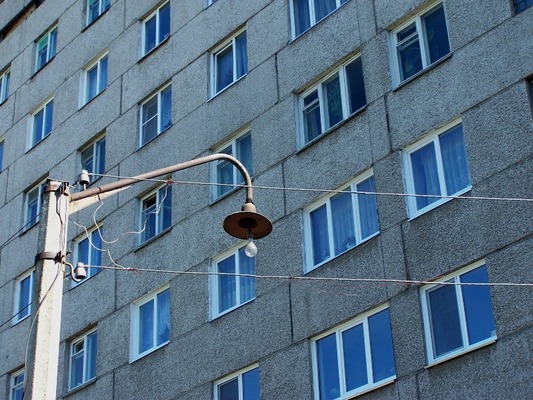 Anyone who travels on Orange Blossom Trail in Orlando, FL has to see an old abandoned nightclub with a airplane sticking out of it. This building for years has spiked my interests. After several calls around the city of Orlando I tracked down the owner of the building. He and I talked and he agreed to let me in the building as long as one of his staff could go with. I met with both the owner and his staff and received a lot of history of the building.

A little history of the building:

1947 - Built as opened as the "Pole Barn" a country western club.
1969 - Sold to current owner. Current owner turned the club from the "Pole Barn" into "The Inferno". This change apparently cost $750,000 (yes in 1969 money). The Inferno was a "Santanic" club where "the kids could walk on the wild side"
1988 - Club rethemed to "Crossroads" a club for everyone.
1989 - Club rethemed to "Stars" This club was futuristic and featured a lot of neon lights and space settings.
1990 - Club changed to "Off The Wall" featuring secret rooms, a "crashed" airplane coming through a wall and just really off the wall themes. A lot of neon lights. Keep in mind, every time he rethemed the building he never removed the old items. He just added to it. So by this time (and the pics you'll see) there's a lot going on here.
September 15, 1992 - The club closed. Neither the owner nor his staff member (who was the club manager from 1970 - 1992) would mention why. This just added to the overall confusing nature of this building.

During the tour, we got lost several times. As Ive said this place has several secret rooms, staircases to nowhere and hidden doors. Our tour took 4.5 hours and we had to go back outside several times because the decay in this building is severe and not healthy to breathe in. If you want a picture explained please let me know. There's 187 pictures in total. Keep in mind, the top floor was perfectly preserved whereas the first floor was completely destroyed. Yes the Gold Room is on the second floor. Once you look at the pictures you'll know what I mean by the Gold Room.

If you have any questions please feel to message me. Comments are more then welcomes